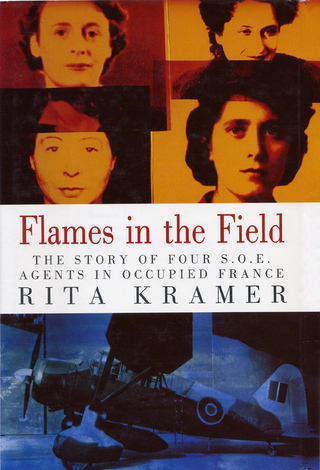 Flames in the Field:The Story of Four SOE Agents in Occupied France

...I will tell you how I come to be writing to you and with what purpose in mind.

Four years ago my husband and I, driving through Alsace on our way to Italy, stumbled on Struthof-Natzweiler. A sign on the road pointed in two directions--one way to the bar-restaurant, the other way to the gas chamber. We decided to investigate and found ourselves at the gate with the word Konzentrationslager on the wooden sign above it. There was no English-speaking guide at the camp that day, so we were given the guide’s text, printed on several worn sheets of paper, and we walked through the camp, each of us by turn reading aloud until we could not go on, then handing it to the other one. You will know what we read. As we walked and read, we passed groups of French schoolchildren and groups of tourists, most German. Both the children and the grownups were talking casually, occasionally laughing, just like visitors to any tourist attraction.

When we came to the crematorium we stood in front of the oven, looking at the stretcher, the wooden shoes, and forgot to move. A large woman pushed my husband aside with a peremptory Bitte and snapped a picture of the crematorium.

In that room we saw a plaque with the names of four women on it. I remember that we noticed two of them had English-sounding names, one was French and one Slavic. It must have been in the English-language visitors’ guide to the camp that we learned that the four had been captured while on a mission into occupied France. We stood there a while, not quite able to go back to the outside world, the pleasant end-of-summer day, the tourists, our own trip, hotels, meals...and we wondered who they were, those four women.

After we left and re-entered our own lives, we talked about Natzweiler, some of our impressions, and some of the things that had occurred to us there. How small it was, for one thing. How surprisingly small for the amount of evil and pain. I had always imagined the camps as enormous, the towers as reaching the sky, but it was possible to do those things in a very small place...

We went on wondering about those young women. Once in a while we would be reminded of the place and we would think of them, or we would tell someone about the trip and then about the camp and the plaque we’d seen. I thought of finding out about the four...who they were, where they came from, what brought them to that place--but I didn’t know where to begin. And I was immersed in writing a book at the time. And then one night, shortly after I’d finished this last book, we switched on the TV set to catch the late news, and there was a documentary narrative voice saying words that caught me and pictures that were familiar first in a general way and then in a particular way and I recognized Natzweiler. I sat there, hardly believing what I was seeing, when you were introduced and began to speak about those four young women...

I would like to write a book about them. About who they were and what they did. I think they deserve to be remembered. History, after all, is what we choose to remember. I cannot think of anything I would rather learn about and write about than their stories, which must eventually become one story, the way the stories of Achilles and Agamemnon and Ulysses become one story. Would you help me by telling me what you know about them and how I could learn more about their lives? I would come over there to see you and whoever else might be able to give me information and to visit places they grew up in and meet friends or relatives who remember them...

Thank you for your most interesting letter of 20 January and the literature...It gave me the opportunity to judge the quality of your writing and your attitude to some problems of today.

As regards the book you wish to write, I shall be pleased to give you all the information that I have--and it is quite a lot!--if we can meet. I have to deal with a very voluminous and varied correspondence and will not attempt to brief you in writing...We could...meet in London or down here.


Well, that is how it began. The following summer I went to Winchelsea, on the East Sussex coast, to meet Vera Atkins, a remarkable woman who has lived an extraordinary life. She does not talk about herself, but told me a great deal about the women I had come to ask her about, the organization to which they had belonged, and what had become of them. She suggested some books for me to read, official history as well as personal memoirs of others in the organization who had known and worked with “my” woman, and referred me to some of their fellow agents still living in England and in France.

And so began a journey of such complexity that, if I had known then what I know now, I probably would not have begun--but I would have missed the most fascinating quest of my life. The organization, a secret one, was part of the story, but the more I read and the more I talked with those who had been part of it, the more the stories of unique individuals emerged. Some were proud, some were bitter, all had stories to tell of adventure, honor, and betrayal. Many disagreed with each other’s versions. And that was only among those Vera Atkins had led me to and the trail I’d followed from there. I was also eventually to get in touch with others, in France, whose view of things was still different--dramatically so--and to find myself in the midst of a mystery that may never be solved but still persists unabated after half a century. Material flooded in one me. I wrote hundreds of letters, some of which were not answered, some of which received perfunctory replies, some of which led me to encounters with unforgettable men and women. I made several trips to England and to France, interviewing former agents and those who had known them and been involved in those long-ago events they remembered so vividly, and consulting archives, both official and unofficial...

From the Epilogue:
“The man who can most truly be accounted brave is he who knows best the meaning of what is sweet in life and of what is terrible and then goes out determined to meet what is to come...Some of them, no doubt, had their faults; but what we ought to remember first is their gallant conduct against the enemy in defense of their native land. They have blotted out evil with good, and done more service to the commonwealth than they ever did harm in their private lives...and, in a small moment of time, the climax of their lives, a culmination of glory, not of fear, were swept away from us.”

--from Pericles’ Funeral Oration, Thucydides,History of the Peloponnesian War