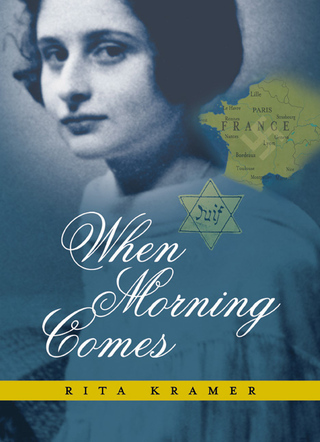 It’s the summer of 1940, and night has fallen on Europe. A young woman whose family has taken refuge in France sees the nation that has defined itself as the cradle of human rights transformed by the menacing shadow of the Third Reich. As the Nazification of France proceeds, she is caught up with her lover in a Jewish resistance group that becomes part of a larger organization directed from London. A story of personal drama and political intrigue set against a background meticulously researched and vividly portrayed.

From the first chapter:
She was aware of the dull thumping before she realized what it was, that it was her own heart throbbing. She stood motionless, listening, trying to make out the noises in the street, to separate them from those of her own being. Fear, crystal clear, was the only other thing she was aware of. Fear, and the pulsing in her own body.

After a moment she heard the footsteps pass by the doorway where she stood, flattened against the stone wall, cold and damp with her sweat. They had not been following her. Not this time. Someone else was rushing to get inside some safe place, some haven before the time when they would become prey.

She stepped out of the doorway slowly, taking care to put her feet down carefully, to make no sound that would give her away, and met the darkness in the street. Darkness and fear of what it held, cold and silence. This was Paris at night.

It hadn’t always been that way.

When she had first seen Paris it seemed to be exploding with color and noise, the streets crowded day and night, the cafés along them bursting with life and she herself wondering how she could contain such joy, such excitement. She had read about the Paris of poets and painters, the elegant quarters and the demimonde, the buildings the stones of which were ancient happenings. There were the bookstalls along the quays, the sudden sight of the Eiffel Tower and the awe. The thought, So it really does exist...

She was young enough to feel all this and old enough to feel it. She knew she was beautiful and that men and women looked at her and smiled because she was young and beautiful and smiling. Sitting by herself at a café table, feeling that she was drinking in Paris, saying to herself, I am really here. This is me at this moment sitting in a café in Paris, France. That was their little joke, hers and her brother’s, to say Paris, France as though there might be some confusion about which of many Parises they were talking about. And she wanted to hold this moment still, make it stay as if a film projector had been stopped and a single frame frozen on the cinema screen. She was young enough to have moments of entire happiness, old enough to suspect what might lie ahead.

She made her way slowly along the stone walls of buildings, past the huge doors of carved wood with their brass knobs and handles, keeping as close to sheltering shadows as she could, still afraid, bargaining now with the god she didn’t believe in, for one more safe return, one more spasm of relief that she had beat the curfew, delivered her message, come home safe after all.

From Chapter Ten:
Ian Westcott fell out of the sky like a deus ex machina. That was how she saw him, how everyone seemed to perceive the sandy-haired agent with the cleft chin who towered above the Frenchmen in the group that rushed to meet him as he hit the ground. Even rolling over in that ridiculous posture he had seemed possessed of a natural grace. His coming seemed like a signal they had been waiting for and they took heart. London--the Outfit, as its agents referred to the secret organization that had trained and sent them--had finally shown its confidence in those waiting here in the field by sending it if not their only then surely their best begotten son.

He inevitably inspired mythic and literary comparisons. She thought of King Arthur and Sir Galahad, legends in the English picture books of her childhood. And it struck her that this impressive figure was, unlike so many of the rest of them, a match for the Nordic giants bent on taking over the world. Tense, frightened, on the edge of exhaustion, those who saw him were reassured by his confidence. Only Max reminded her that this newcomer had not been there long enough to understand what there was to be afraid of, had yet to see anything to shake his confidence.

They were drawn into his orbit as he made plans to organize sabotage groups radiating out from Paris across the northeast from the border of the Saar to the Channel coast. They would communicate with London through the radio operator he had brought with him, and would work together receiving arms drops and storing them in readiness for the invasion that would storm Fortress Europe. His presence and the scope of his activity signaled, surely, that it would no be long now.

“It’s like waiting for the Messiah,” Weissman said, when they talked about the expected arrival of the Allies. “Jews know how to do that. They’ve had a lot of practice.”